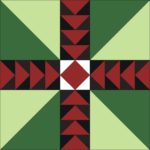 Woodland Path-In the early 1780s, the stretch of land between Amherstburg and Delaware was little more than dense forest. Southwestern Ontario was not the thriving and inhabited area that we know so well. Very few people lived here and travel through the dense forest was limited.
The first people to traverse the dense forest were the native communities along the Thames River. They named the woods ‘Longwood’s’ and carved out a rough path through the forest. The Indian trail was hard to follow and traders often lost their way in the dense woods.  Imagine Skunk’s Misery 200 years ago!
Upon rumours of war in 1810, George Ward was asked by the British army to settle and construct an inn along the Longwood’s path. Construction of the inn required the clearing of timber and more traffic increasingly defined the path. By the time the war was in motion in 1812, the Longwood’s path was a key military route and steadily expanded in size and importance.
Written by Rosemary Cranney, Becky Clarke and Ken Willis