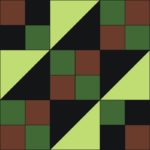 Wagon Tracks – After the War of 1812, the Longwood’s path expanded. By the 1840s, the road had been widened enough to allow wagons to travel back and forth. The widened path inadvertently led to the development of the area and increased communication along Longwood’s Road. Many people moved to settle the region in and around George Ward’s original settlement.

The expansion of settlement and the road allowed the evolution of transportation. By the 1850s, the rail system through the Village of Newbury was developed. In addition, another Indian trail (present day Hagerty Road) also expanded allowing wagons and the first stagecoaches to traverse the region through Wardsville. The expansion of both trails formed the basis for communication and travel in Wardsville and area. Community members were now able to access new towns and settlements along the Thames River region.