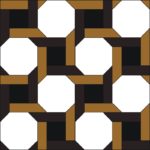 Twisted Rope-represents the personal trauma and hardship George Ward suffered during the War of 1812. During the war, George Ward returned home to see his family and ensure that they were safe. Upon arriving, George Ward was captured by the Americans and repeatedly questioned. The American forces wanted George Ward to reveal the position of the British army in the area in order to gain the advantage.

Instead, Ward remained loyal and revealed no information to the American army. After holding him, the enemy attempted to hang George Ward three times, ‘until the life was almost extinct,’ as stated in government records. George Ward’s ingenuity allowed him to escape and return to the British army. However, his property, home and tavern were burned to the ground in retaliation.
Hosted by:
Wendy and Dave Yorke.