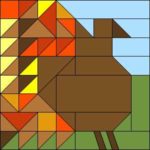 Due to the many marshes in our area, duck and goose hunting has always been plentiful and popular. Wild turkeys were also in abundance during the 1800’s until hunted to near extinction. They have been reintroduced in the last 20 years and are now thriving. It is not uncommon to see a whole family of turkeys walking alongside the road. In the days of our pioneers, all this wild game made for plentiful food. Bird feathers were useful for many things such a mattresses, pillows and quills for writing.

Wolves, bears and deer were also plentiful. In fact, wolves were such a terror to settlers and their livestock that a six dollar bounty was placed o a wolf scalp in early 1830. When a deer was shot, the skin was stretched and tanned for making into very serviceable clothing such
as moccasins, pants and jackets. Venison was welcome and the hind quarters when dried and cut into small pieces made a handy portable food. Bears caused problems when they attacked the livestock or got into the corn but mostly they preferred the nuts and berries which were very plentiful. Both wolf and bear hunts were common until well into the middle of the 19th century.

A pioneer named Washington Best in an interview appearing in the Chatham Daily Planet, December 1903 tells a story about growing up in the 1830’s. “There were lots of wild animals around our place when I was young. Wolves were quite plentiful and I remember driving away a wolf that was chasing a flock of sheep. Herds of deer were quite frequent and I remember often seeing 10 to 14 of these animals together. But I only ever saw one bear and it was up by Thamesville, he was swimming across the river and then disappeared into the woods.”

In the 20th century the fame of hunting in the marshes of Dover caused a couple of special hunting clubs to form. Some well known film stars would come to relax, hunt and fish at these places. I believe that one of these lodges is still in existence. Sport fishing is also very popular in Chatham-Kent. Yes, we are indeed blessed with the wealth of Mother Nature’s bounty, in all things a”land of milk and honey.”