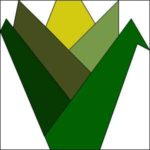 Each summer many of us look forward to a feast of delicious, buttery corn on the cob. Believe it or not in corn’s long history this is a realatively recent way of eating it. In fact many European newcomers to our area have refused to eat corn considering it to be animal feed. Such was not the case for First Nations and the early settlers of Chatham-Kent for whom corn was a staple food.
Corn had been grown in Kent from the dawn of recorded history and the Neutral Indians had many plantations of corn in this area. First Nations used a technique which today we would call companion planting but then was called the Three Sisters. Corn, bean and squash seeds were planted in a mound. The corn provided a structure for the beans to climb and the beans added nitrogen to the soil. The squash leaves shaded the soil, preventing weeds and retaining moisture while the prickly vines deterred pests. The three crops also complimented each other nutritionally with corn providing carbohydrates, the beans protein and the squash vitamins as well as oil from its seeds.
Early settlers would certainly never have survived without the gift of the Three Sisters from the Native American Indians. As there was seldom a mill close by, a log box affair with a hard wood plunger was used to process the corn into meal once it was dried over the fire. Only a small quantity could be done at a time and this mixed with stewed pumpkin made excellent
johnny-cake. Corn meal formed the staple dish since wheat bread baked in Dutch ovens was an occasional luxury. Corn meal mush for breakfast and lunch was most common. The corn stalks were saved for fodder for oxen or bedding for mattresses.
Scientific agriculture enlarged the acreage and increased the corn yield by evolving faster growing varieties whose maturity within a short season minimized the danger of frost and premitted Chatham-Kent to become Canada’s largest producer of seed corn. Experimental hybrid and cross-hybrid corn have berern grown here for decades making the seed corn industry in Chatham-Kent one of the greatest Canadian agricultural achievements. This industry has also provided summer detasseling jobs for generations of Chatham-Kent youth, for many thier very first employment experience.
During the gasoline shortages of the 70’s and 80’s corn was used to make ethanol fuel with a large ethanol plant established in Chatham. Since then the industry has expanded in many ways. Today the exhausted carbon dioxide from that ethanol plant is piped across the road to a vast greenhouse complex which grows peppers and cucumbers. Ethanol is also an essential ingredient in many of the products we use in our everyday lives such as alcoholic beverages, medicines, disinfectants, fragrances, animal feed, paint, ink, detergents and insect repellent.
Corn was essential to the lives of the early people in our area and it si interesting to note that while our needs are differnt, corn continues to play an important role in daily life so many years later.
We are lucky enough to have the Dieleman family sponsor our corn block which is fittingly located at their Corn Maze on Longwoods Road. Current events and celebrities are often the inspiration for maze designs and a feature on the Rick Mercer Show and a visit by Chris Hadfield have made this maze quite well known.