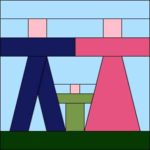 In 1790 and 1791 Patrick McNiff made a survey of the land along the Thames. The new settlers applying to the Land Board were Empire Loyalists who had been offered free land and those who had fought in the American Revolution for the British, Scotch and Irish emigrants looking to start a new life and later slaves escaping to freedom in Upper Canada. All knew their new life would demand hard, endless toil and all were willing to take the chance. The Land Board at Detroit was swamped with applicants: 66 applied in 1790; 36 in 1791. Each was allotted 200 acres nearly all were heavily forested.
First order of business was to build a shelter. The trees were both a boon and a burden as they could be used for all manner of necessities but it was hard toil to take them down and make a clearing to plant a little grain. The larger the family the more help to improve your land. These settlers had little cash and so the barter system was used almost exclusively. Once the rude cabin was built the chimney, if there was one, and fireplace were the source of heat, light and all cooking. Everything had to be made by hand and a lot of these chores were done during the winter months. The men made axe handles, mended shoes, made hickory brooms, and also furniture. The women made clothes from animal skins, carded, spun and dyed the wool from their sheep then wove it into cloth with hand looms. Tallow candles would also be made and straw hats woven from grasses or wheat and rye straw. Paper came from birch bark and ink was made from boiled maple bark; pens were sharpened hickory sticks or quills. All feathers from hunted fowl were saved for bedding. So with patient toil the pioneers provided themselves with the amenities of life and if they could not have what they wanted, they invented a substitute or did without.
Fortunately, wild game was plentiful as were fish so those who lived along the Thames had a varied diet although once they grew grain it was a long walk or canoe paddle to the mill to have it ground. Pastimes, like the surroundings, were rude and wild. Coon hunts, cock-fights
rifle matches, wrestling and fisticuffs. A backwoods dance was sometimes held, usually at a barn raising and there was always locally made whiskey. By 1840 there were perhaps 13 preachers covering the whole Western District and even fewer doctors, Schools were also few and far between with students attending classes maybe 6 months of the year.
The barter system was mentioned earlier and these prices were the rate in 1842: a yard of cotton cost a bushel of wheat; a bushel of salt cost 18 – 20 bushels of grain. If you had cash you could buy a 200 acre farm for $150 – $200. At this time there were only 5 waggons in the
whole county! Travel was mostly on foot and because the country was so sparsely populated, the fire was banked at night and you might get up in the morning to find a couple of strangers curled up beside your hearth. Chatham was barely a village but most of Kent was made up of rural hard- working folks.