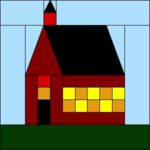 Though there are many country churches in the lower Thames valley and they all played a huge part in the lives of the settlers for faith, family and fellowship, we chose to tell the story of St. Thomas Anglican Church on the Dover Township side of the Thames River because of its long and original history.
The story starts with the Thomas Smith family purchasing a 200 acre lot in 1798 that orginally belonged to Sally Ainse. (more of her in the Providence Block), The surrounding country was still dense forest with a few scattered farm clearings along the river. That winter, Ann aged 12 and her younger sister Mary aged 10 went to fetch the cows that had been foraging in the bush. A severe snowstorm blew up and the girls lost their way coming home.
Taking shelter as best they could behind a fallen log, they huddled in each others arms to try and stay warm. Searchers twenty-four hours later found them that way but Mary had frozen to death and Ann’s legs were so severly frost bitten that immediate amputation was the only alternative to a horrible death by gangrene. This chore fell to neighbour Hannah Dolsen who was something of a local nurse practitioner. Ann was given some of Matthew Dolsen’s whiskey to dull the pain while her legs were amputated below the knee on the kitchen table. Ann Smith survived this ordeal by 72 years and got around quite handily on her knees.
Ann worked on the farm and it is said that she defied General Harrison prior to the Battle of the Thames when the American forces stopped at her farm. She refused to take an oath of neutrality and like everywhere else along the Thames where this oath was refused, it is likely Harrison confiscated most of her food, animals and any meager valuables she might have possessed but he didn’t burn her farm.
Ann was a deeply religious woman and in 1847 she bequeathed 300 acres to the Bishop of Toronto for the erection of a church to be built over the family graves and to be called St. Thomas. Previously she had given 5 acres for the site of the church and the invested monies from the acerage was to provide upkeep and repair to the church. Ann Smith died while visiting friends in Kentucky in January of 1870.
In the Spring of 1875, Rev. F.W. Sandys of Christ Church in Chatham met with a group on this donated property to form the new parish and make plans for building the church. Prior to this time the settlers of this area had met in the Smith family cabin on the property. About 30 Anglican families assisted in the building of the church over the Smith family graves as specified in Ann’s will.
The cornerstone was laid in a great ceremony October 12, 1875 with the Second Bishop of Huron, Rev. Sandys and the Grand Masonic Lodge of Chatham who made the trip to the site aboard the steamer Steinhoff from the Rankin Dock in Chatham accompanied by the Fire Dept.
Band. After the ceremony a great picnic was held on the grounds and Br. Eberts of the Grand
Lodge told the story of Ann Smith’s generosity to the assembled crowd. Then all embarked on the Steinhoff for the short trip back to Chatham. It is noteworthy that this same ceremony was repeated 100 years later in 1975 when a second cornerstone was laid. The only difference then was that the Masonic Lodge and the Bishop of London came on the Bradley yacht, steamships on the Thames being long gone.