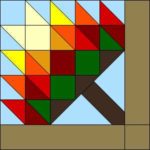 Although what was known as the Western District was densely forested, this proved to be both a boon and a bother to the new settlers during our time frame of 1750-
1850. The Carolinian forests, which covered most of the area, were wonderfully varied in the type of trees: elm, red and white oak and pine, hickory, hard and soft maple, ash, sycamore (also known as buttonwood), black gum, chestnut, sassafras, cherry, dogwood and most commonly black walnut. The walnut was so common that it was used to build
the gun boats at the forks of the Thames (Tecumseh Park) that Lt. Governor Simcoe ordered after his visit in 1793. Oak was so plentiful that 6 ft. X 10 ft. Planks were laid as toll roads which lasted nearly 10 years. Elm and ash were used for fence rails. Since
each settler was required to clear so much of his 200 acre holding and build a sturdy home after the first year, the tree came in handy for building a cabin, out buildings and sometimes a boat.
The lumber industry thrived and much timber was shipped down the Thames and overseas via the Great Lakes. Huge rafts of oak and walnut were floated downriver to Louisville (population 70 in 1845) where they were trans shipped by boat to larger cities. Timber was also burned for potash with black salts made mostly of elm. It seemed that our forests were limitless! Now Kent County has less tree coverage than any other county! A disease in the 1930’s devastated the native chestnut trees and in the 1950’s and ’60’s Dutch Elm disease destroyed most of the stately Elms in Ontario. Recently, the Emerald Ash Borer has taken its toll on our native ash trees.
So it is great to see that an initiative has been taken to identify, protect and perhaps propagate the remaining original species of the once vast Carolinian Forest.

Sources: Romantic Kent by Victor Lauriston
When Chatham was Woods by Johs Rhodes