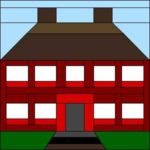 On the south bank of the Thames River in Raleigh Township stands a handsome Georgian style home known as McCrae House. It is hard to believe that this house is over 200 years old and one of the oldest brick, if not the oldest home in Chatham-Kent. By today’s standards it is a lovely, well-kept home but imagine the impression it would have made two centuries ago.
Settlement along the Thames River had only begun in the 1790’s. There were no towns or villages and Chatham did not exist. The nearest sizable community was Fort Detroit. Since roads through the heavily wooded wilderness were non-existent the river was a convenient travel route. Most of the settlers lived in log cabins as they struggled to carve a living out of the forest. What would a traveller think as he came upon this impressive structure?
Thomas McCrae had the house built in 1813 by a man named Lenover, a skilled mason who until now had been unable to practice his trade in this area. McCrae was obviously a successful man. He came to Upper Canada as a Loyalist in 1774 and served for three years as steward on the armed ship Gage on Lake Erie. His name appears on census records for 1779 and 1782 in Detroit where he made his living as a tailor. In 1789 he petitioned for land on the Thames where he had already purchased a farm on an Indian deed and built a home. After the official survey, he was granted the land in Raleigh Township where he continued his tailoring
trade as well as being a store and inn keeper. He was a well respected individual and in 1800 was elected M.P. For Kent. As captain and company commander in the Kent Militia he was present at the capture of Fort Detroit in the summer of 1812. Family lore has it that the house was built with reward money received from this successful defeat of the Americans.
“If only the walls could talk!” and in a way they do as bullet holes from an 1813 skirmish are still visible. This house has been witness to so much of early Chatham-Kent history and thanks in part to McCrae’s diary we have some of this information. On October 1, 1813 prior to the Battle of the Thames, there was a large First Nations encampment at Dolsen’s Landing just down and across the river. It is believed that Tecumseh himself paid a visit to Thomas McCrae’s home. Just days later on October 5 the great chief would loose his life in the famous battle near present day Thamesville.
In December of that same year, basking in the glory of their victory at the Battle of the Thames, the Americans set up headquarters in the McCrae home. The settlers resented their presence as they tried to coerce them into taking oaths of neutrality and foraging parties sought supplies from already meagre stores they themselves needed for survival. A party of Norfolk and Middlesex Militia led by a Lt. Medcalf were sent to Rondeau area to secure some cattle before the Americans did. Here they learned of the American post on the Thames and decided to attack. Trudging through the snow covered wilderness, they were joined at The Forks (Chatham) by members of the Kent Militia. Before dawn they made a surprise attack, firing a volley of shots through the door and windows, hence the antique bullet holes. The 32 militia were able to overtake the 39 Americans, killing one and injuring three.
The fight at McCrae’s was laudable for a couple of reasons. Regular British troops tended to look down on “farmer soldiers” who were usually ill-equipped and poorly trained but here they had managed to capture a troop of American soldiers without any aid from British regulars. This feat has the distinction of being the only time in Canadian history when a militia unit defeated regular soldiers. Even more astonishing is the fact that Lt. Medcalf and his original group of men walked 350 km. In ten days through adverse winter conditions prior to the attack. “Yes, if only the walls could talk!”