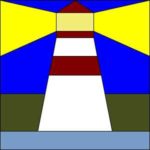 Approximately 200 years ago a family by the name of Cartier, supposed descendants of
Jacques Cartier, moved from Trois Rivieres in Lower Canada to the mouth of the Thames River. They fished on Lake St. Clair and set up a lantern on a post to guide them home after dark. In time a wooden lighthouse was built but this structure was destroyed by fire during the War of 1812. In 1818 the lighthouse was rebuilt. It’s three to six foot thick walls were constructed of limestone quarried at Amherstburg.
In 1837 the federal government took possession of the lighthouse and Claude Cartier petitioned the government for the appointment of keeper of the lighthouse. In 1830 Claude had come to the tiny village of Chatham and opened the Chatham Hotel, a log tavern well known for its inexpensive meals, three cent shots of corn whiskey and splendid New Year’s Eve balls, but injuries he received in the War of 1812 made it increasingly dificult for him to run his business. He receiverd the appointment and remained keeper of the light until his death in 1855. During this period a square wooden tower was erected to serve as the front range to the thirty-two foot cylindrical stone tower.
Claude and Nancy had twelve children and their son Thomas took over the position of lighthouse keeper after his father died. The Chatham Planet of February 1870 credits him with saving, at great danger to himself, eleven lives during the previous twelve years. In 1872 the Canadian Government presented him with an inscribed gold watch for saving thirteen lives. For 4 years after Thomas died in 1880 his wife Emma cared for the lights until her son, Henry Joseph Cartier, was appointed official keeper. In 1903 he was awarded $250.00 compensation when the keeper’s dwelling was destroyed by fire. For over 110 years until the death in 1950 of William, brother of Henry, the Cartier family faithfully fulfulled the daily task of keeping the kerosene lamp burning. With first primitive means and then an official lighthouse the dedication of this family guided and kept sailing ships and steamers loaded with cargo and passengers safe for roughly 150 years.
According the an 1878 inspection the lighthouse housed an iron lantern 7 feet 6 inches in diameter containing five burner lamps with three 16 inch and two 14 inch reflectors. The smaller range light which stood on a nearby pier contained a lantern 6 feet 6 inches in diameter with one burner lamp and a 14 inch reflector. The two lights when aligned provided a more accurate guide for navigators.
A stone ring which can be seen today shows where an extension was later added bringing the lighthouse to its current height of fifty-five feet. At some point an electric beacon was installed. In 1966 the lighthouse was decommissioned. Over time it began to show its age and in 1973 its new caretakers, the Lower Thames Valley Conservation Authority, took the structure down stone by stone and rebuilt it using the orginal materials.
Two centuries later the area around the lighthouse has changed dramatically. Lighthouse Cove is a community of homes, restaurants and marinas. In good weather the lake is dotted with pleasure craft. But still the lighthouse, one of the three oldest on the Great Lakes, stands a proud tribute to a bygone era.

We would like to thank The Lower Thames Valley Conservation Authority for permission to put this Quilt Block on their property.