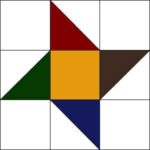 It has often been said, with tongue in cheek, that descendents of those who lived along the river at the time of the Battle of the Thames have in their family lore a story that connects them to the famed Indian Chief Tecumseh. Unfortunately most of these stories lack documentation. There is one family, however, whose claim to a connection, is confirmed at least by local history books. Fredrick Arnold and his family emigrated from Germany to the Thirteen Colonies. After the American Revolution, as Empire Loyalists, they came to Upper Canada, first to Fort Detroit, then to Essex County finally settling along the Thames River in Kent County one of the first non-native families to settle here.
On a small creek which entered the Thames east of present day Kent Bridge, Fredrick built a sawmill. Sometime before 1797 his son Christopher added a grist mill. (His German name being Stoffel he was nicknamed “stuffed Arnold”.) This mill, known for its high quality flour, was a boon to the area as some residents went as far as Detroit to grind their grain. It is interesting to note that Chritopher made a two month trip, much of it on a raft down the Thames and across Lakes St. Clair and Erie to purchase his two millstones in New York. (See the complete story of the Arnold mill under Grist Mill)
In October 1813, after the British naval defeat on Lake Erie, a retreat up the Thames from Amerstburg and Fort Malden began. On October 4, the night before the Battle of the Thames in which he was fatally wounded, Tecumseh and many of his warriors camped near Christopher’s home. Along with other area settlers such as Captain Thomas McCrae, Sergeant Christopher Arnold was a member of the Loyal Kent militia. These men knew Tecumseh from their participation in the capture of Fort Detroit on August 16, 1812. and most likely from other military campaigns as well. Chief Tecumseh spent his last night and ate his last meal at the Arnold home. No doubt the evening was spent planning military strategy for the next day’s battle which would take place nearby, close to the Moravian mission of Fairfield. One plan that might have been hatched that night was to hide the millstones in the woods. This was to prove a successful move as marauding American troops were convinced not to burn a non-working mill.
The morning of the battle Christopher stood on the mill dam and was to alert the Indian Chief of the approach of the Amercans by throwing up a shovel full of dirt. Tecumseh then took off on his white horse. As planned an Indian woman in a canoe was waiting to take him to the other side of the river and once his horse swam to shore he was able to elude the enemy at least temporarily.
Unfortunately neither the hospitality nor the help of a friend was to save the illustrious Chief as he was killed later that day at the Battle of the Thames.

SOURCES: Romantic Kent by Victor Lauriston
When Chatham Was Woods: Reminiscences of the Pioneers by John Rhodes
Chatham-Kent Museum