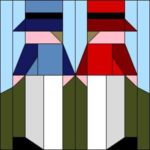 When one thinks of soldiers and the War of 1812, undoubtedly the famous British red coat comes to mind. While not quite as distinctive, the American uniform with its blue jacket and shako cap closely resenbled the British one. The mounted Kentucky riflemen in their black hats and red fringed black coats and the Indian warriors in their various styles of war dress complete a common image of those who fought in the War. Although not as colourful and picturesque as the others, another type of soldier was involved in this war, often in more ways than one. He was a member of the local militia.
Local militia were often described as rag tag groups whose drilling sessions involved more drinking than training. While that was often true many militiamen made great contributions to the war effort. It is important to try and understand the dilemma many of these men found themselves in. Unlike enlisted soldiers, they did not make the decision to join the army. Even years before war had been declared all males aged 16 to 60 had to assemble on June 4, the birthday of King George III for the traditional muster day. However, once war was declared they were required to do a 30 day stint of duty. Such an absence could spell disaster to a family. An early settler’s life was a constant unending round of chores necessary for mere survival. Many farmers, much to the alarm of the authorities, chose to ignore orders, hoping the problem would go away. Even wives came out in force to defy Colonel Talbot’s efforts to draft their husbands.
Many of the early settlers along the Thames were weary of war. As Empire Loyalists they had already paid the price for their patriotism. Many had faught in the American Revolution and remaining loyal to Britain they were deemed traitors and forced to leave their farms and possessions and move to Upper Canada. Although they were given free land along the river, it was located in an untamed wilderness. With few possessions and tools they began to carve out a new life only to be confronted with yet another war a few years later.
Other problems plagued the militia units. Britain had been involved in a costly war with France for several years and supplies and money for her regular troops were scarce. Militiamen were often described as ill clothed, some even shoeless. Supplies, if any were often leftovers from the revolution. Many of these men did not even own a gun, let alone know how to use one. Good leadership was also hard to come by. Never the less proof exists of the contributions of area militiamen.
The Chatham-Kent Museum has in its possession a medal given to John Bedford for his part in the capture of Fort Detroit on August 16, 1812 under the leadership of General Isaac Brock. It is one of only 20 medals given to Chatham-Kent pioneers for their contribution to that victory. John would only have been about 16 at the time and was the eldest son of Loyalists Robert and Elizabeth Bedford. Robert had faught in the American Revolution. In the late 1790’s he left Pennsylvania to settle on the Thames in the Chatham Township area. Captain Thomas McCrae and Sergeant Christopher Arnold of the Loyal Kent Volunteers also took part in the capture of Detroit.
Another militia story occurred along the Thames River in Raleigh Township. The winter of 1813 was a difficult one not only for the settlers along the river whose farms had been devasted by the Battle of the Thames but also for British troops stationed in the London District and American troops in the Detroit/ Amherstburg region. Knowing that farmers often sent their cattle to graze in the marshy lands near Lake Erie, the British sent 19 Norfolk militiamen to retrieve some cattle near Rondeau before the Americans did. When they arrived, the John Craford family informed them that not only did the Americans have the cattle but that a party were quartered at the Thomas McCrae home on the river. Eight Middlesex militiamen joined the group and despite the cold and snow decided to surprise the Americans. At The Forks (Chatham) Lt. John McGregor and 6 of the Loyal Kent Volunteers also joined the expedition.
The orginal group having travelled 100 gruelling kilometers in a day and night were exhausted. Never the less the next morning all but 3 were able to capture the group of 39 American troops. What this small group accomplished has the distinction in Canadian military history of being the only time a militia group has captured regular U.S. Troops. The McCrae House still stands today complete with bullet holes as proof of this incident.
These men, ill-equipped, often exposed to dire circumstances and with so much to lose are some of Chatham-Kent’s unsung heros.

SOURCES; Greater Evils; The War of 1812 in Southwestern Ontario by Glenn Stott
The Civil War of 1812 by Alan Taylor
Chatham Daily News