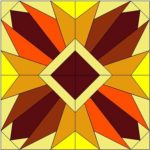 Since the beginning of time, fire has offered man both comfort and utility. It was no different for early people living alone in the wilderness. Beneficial as fire could be, it could also be ruinous, destroying in seconds, a life or the work of years. Careless attention to a fire, candle or lantern, a lightening strike or combustion of grain dust in a grist mill could bring devastation to a family or community. And so it was that fire destroyed the Moravian Mission of Fairfield in October of 1813. But it was not nature or carelessness that destroyed this village but war.
The Moravians were a Protestant religious group from central Europe who by the early 1700’s had established missions in Bethlehem Pennsylvania and Winston-Salem, South Carolina. In North America theses missionaries sought to help native American tribes whose life was being threatened by the white man’s thirst for land. The white man did not distinguish between peace loving and war faring tribes. In the British-American war, they were distrusted
by both sides and tales of atrocities, founded or not, fuelled the settlers’ fears. One group of peaceful Delaware Indians were the victims of such hatred. After receiving permission to harvest their crops at Gnadenhuten, Ohio, 96 adults and children were brutally murdered by American militiamen.
The Moravian missionaries sought to find a place of safety for the rest of their Delaware
brethren and eventually the British gave them land on the Thames River in 1792 and for the next 20 years it was a place of relative peace and prosperity. The Moravians taught their Indian brethren farming, domestic and academic skills as well as the word of God. Since the Thames
River was a major transportation route through the wilderness between the Detroit/ Amhurstburg area and the Niagara region, the village was very often forced to offer food and lodging to a wide variety of travellers, traders, Indians, settlers, soldiers and dignitaries.
In 1812, rumour of war and increased traffic on the river filled the Indians with panic as
they recalled past brutalities. In the Battle of the Thames in which the illustrious Indian chief Tecumseh was killed, Brother Denke and several of the Indian brethren fled to the east. Both before and after the battle the tiny village became chaotic, first with thousands of refugees, families, British soldiers, Indian warriors and animals then American soldiers, prisoners and wounded. Brother John Schnall, his wife and Brother Michael Jung remained to tend the wounded and protect the work of 20 years.
Initially the Americans had promised not to harm the missionaries or the village but then they became suspicious that letters written in German were actually code. Food supplies in cellars, fields and beehives were plundered leaving nothing behind. Commodore Perry, the hero of the American victory on Lake Erie, knew of the good work of the Moravian Brothers and came to their rescue urging them to leave quickly. They hurriedly packed what they could into the wagon of their friend John Dolsen from the lower Thames. As they fled, they turned to see the flames which would shortly engulf the entire village and destroy 20 years of labour.
It would be 2 years before the Moravians and their Indian brethren returned to rebuild New Fairfield, this time on the south side of the Thames at Moraviantown, now the site of the annual Moraviantown Pow Wow. A more recent addition to the community is Nmaachihna, a traditional indigenous village, built by its youth to educate both First Nations and non-First Nation visitors about native culture. Across the river on the original Fairfield site and operated
by the United Church of Canada and friends of the Moravians, is the Fairfield Museum whose fascinating artifacts tell the story of one of south western Ontario’s first communities and the location of Chatham-Kent’s first church and school.

SOURCES: Greater Evils: The War of 1812 in Southwestern Ontario by GlennStott.
When Chatham Was Woods: Reminiscences of the Pioneers by John Rhodes
Romantic Kent by Victor Lauriston
Wikipedia