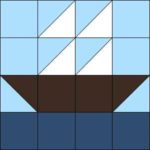 It is likely that Matthew Dolsen built the first sailing craft launched on the Thames in 1795. This was for his use trading up and down the river. In that same year Captain William Baker was commissioned by the military to build gun boats at what is now Tecumseh Park in Chatham. This ill-fated project employed 23 men over the winter of 1794-95 however, none of these boats were ever launched and were left to rot on the bank of the Thames or were burned by the few settlers to recover the iron which was a scarce commodity. During the 1812-14 War
the British, retreating up the Thames, burned a number of boats containing armaments and other military goods to keep them from the hands of the advancing American forces. The well
known artist, Peter Rindlisbacher, depicts a two masted schooner just past the Forks on October
4, 1813. Full of a large quantity of cannonballs and other military stores, it was burned to the water line by the British and still had explosions happening when the Americans arrived on the scene. Also pictured with the Miamis are two smaller boats, likely the Eliza or the Ellen which were also scuttled. In 1901 the remains of the Miamis were raised from the Thames and floated
down to Tecumseh Park. The Tecumseh Historical Society hoped to raise funds to restore the vessel but this never happened and the craft was eventually dismantled and turned into “gunboat furniture” by local manufacturer Manson Campbell.
The increasing commerce of the Thames brought many ships from outside ports. In 1799, larger vessels like the schooners Wilkinson and Thames were making regular trips to Dolsen’s in Dover. The Thames was an 80 ton vessel purchased from the North West Company
by the McGregors of Sandwich in 1801. The Wilkinson was an American ship of 65 tons built at Detroit in 1797. Small sailing vessels such as the Swan and John Askin’s Weazel could go as far as Fairfield if the water was high, collecting grain which they had been doing since 1796 or
earlier. Many of these small ships were lost in the storms on the Great Lakes.
In the winter of 1830, Stephen Brooks built a small, half-decked sailing vessel of 50 tons called the Sans Pareil. This ship later became the property of the Eberts brothers who made a good profit from her. The first Chatham steamboat was built by Duncan McGregor in 1832 when he converted his schooner Rob Roy into a 60 ton steamer, now called Little Western with a 25 horsepower engine and an awning over the deck to protect the passengers. In 1833 the Thames Steam Navigation Company was formed by Ducan McGregor and Henry Van Allen. They built two steamboats at Chatham, the Thames and the Cynthia. The Thames was 160 tons; 112 ft on deck with a promenade of 80 ft .and a 17 ft. Beam. It was fitted with a 45 horsepower engine and operated between Chatham and Buffalo and other Great Lakes ports until December 1838 when she was burned during an attack on Windsor during the “Patriot” revolt. McGregor received $4000.00 compensation from the Government for his loss.
In 1833 the village of Chatham had a population of 100 and was already known as a centre for ship building and steamboats. By 1835 the population had grown to 500. Most of the early steam ships were side wheelers and the technology for building them was quite simple. There were a number of firms involved in building these ships, while the local firm of
Hyslop and Ronald specialized in the fabrication of steam engines to power them.
Probably the most famous locally built steamboat was the Ploughboy featured in the book “The Ploughboy and the Nightingale” by Doris Parkin Keil. This ship and her near-tragic
escape from Lonely Island, on Georgian Bay in July of 1859 came close to changing the course of Canadian history because John A. MacDonald was a passenger Had the ship wrecked
we may not have had Confederation!