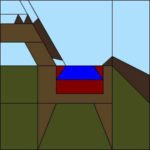 “When I was your age” is a phrase that starts many a parent’s lecture. It is true that in the past children were often forced to grow up fast and perform what today would be considered adult tasks. The following, however, is a story that even great-great grandfather would have difficulty surpassing.
James Steinhoff was born in St. Thomas in 1834 but spent his boyhood and youth in Chatham. When he left school at the age of ten it was to carry mail on the Chatham to Windsor route. James’ job was to travel by horse from Chatham to Stoney Point, a place just past the mouth of the Thames River, an estimated distance of 50km. Chatham at this time was a small village and outlying areas were dense forest broken only occassionally by the odd farm. The road which followed the river would not have been much more than a wide path through the woods where many wild animals lived. At midnight he would be given the mail from Windsor and begin the return journey to Chatham. It is almost impossible today to imagine such a journey for an adult let alone a child! A frightening journey through the night forest with the only light coming from the moon, weather permitting or the lighthouse at the river mouth. For riding this distance three times a week James received $7.00 a month and board.
It should be mentioned here that mail was hugely important to the settlers many of whom had come across the ocean and were never likely to see their homeland again. Although letters from friends and family were much looked for, they also cost the person they were sent to and the fee was pretty high. It was not unknown for mail to pile up in the post office until the receipient could find the money to redeem a letter.
James had to be unusually precocious and entrepreneurial even for the times. His father gave him two calves which he raised and trained. At the age of 10 he traded these oxen for a 100 acre farm. In his teens while the first Fifth Street Bridge was being built, he was employed to ferry people across the Thames. Never one to sit on his laurels, James had many jobs on the various vessels that travelled the Thames and the Great Lakes. One of these was a scow that carried stone for Chatham’s new courthouse and jail, the very same jail that has only recently been decomissioned. He was a stage coach driver and when his family moved to Wallaceburg he worked in the lumber industry. Returning to Chatham, he traded the 100 acre farm for a schooner on which he carried wood from Wallaceburg and Chatham to Detroit. On this route he carried everything from passengers to whiskey from Walkerville. Captain Steinhoff went on the ply many of the waters of the Great Lakes but it is Wallaceburg where he is so well remembered. Here besides his shipping business he added shipbuilding to his enterprises, building several steamers, the most famous being the Dominion which ran between Chatham and Detroit until it mysteriously burned. Upon retiring from his sailing ventures, he became involved in the economic development of Wallaceburg including The Sydenham Glass Company of which he was president. He was even able to add the title of mayor to his list of accomplishments. Despite spending most of his life in Wallaceburg, Steinhoff speaks fondly of Chatham in a 1919 Daily Planet interview: “I do admit to a warm spot in my heart for the Maple City, for it was there that I received my education and start in life. I’ve seen it grow from a small village with the reputed title of Chatham in the mud to the progressive and enterprising city that it is today.”
Although Captain Steinhoff was an exceptional man, he exemplifies the enterprising and hardworking spirit of the early people who built our communities.