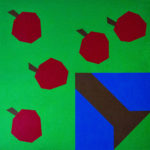 A map of South Dumfries Township in 1875, from the Brant County Atlas, shows a tremendous number of orchards on area farms. The majority of these plantings were for farm use; a supply of apples for the family and processed apples products throughout the year! Apples were preserved by drying and pickling, but the primary use was for the production of apple cider.
Common apples varieties of the late 1800s were Astrakhan, Tolman Sweet, Transparent, Maiden’s Blush, Alexander, Jonathan, Russett, Pippin, Melba, Joyce, St Lawrence, McIntosh, Northern Spy, Greening, King, Wealthy, Snow, Baldwin, Van Wagner and Ontario. The majority of these were developed for cooking and cider production rather than fresh eating.
As farms became more specialised in the 20th century, farmers realized that the land of South Dumfries were particularly well-suited to apple production. Some of the family orchards expanded until most of the farms’ acreage were devoted to apple production. Area orchards in operation today concentrate on the fresh apple market, with culled fruit being used or cider production.

Name of sponsor of Barn Quilt : Sue and Dean Morrison and Family