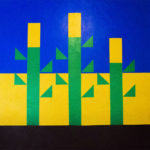 Farming was the primary occupation of the first European settlers in the area; many residents continue that tradition some 200 years later. Land is fertile, well-watered and drained due to its base of glacial till. This makes an excellent environment for apples; once a major crop. Early farms practiced mixed agriculture. A farmer owned a milk cow or two, a horse or two for transportation and field work, a few pigs and sheep, and a small flock of chickens. These animals were fed what the farm produced, as well as feeding the farm family. There were extensive kitchen gardens.

As land was cleared of trees, increased production was sold for profit or used to develop the farm’s herd of livestock. Farming practices evolved and settlement increased, many farmers concentrated on one or two types of agricultural production and purchased commodities they chose not to raise. This became common as agriculture became mechanized, and specialized machinery was required for more efficient production.
Today farms usually specialize in production of a single commodity; dairy, corn, soybeans, and small grains are common; beef, pork, poultry, and vegetables are in lesser production. Hay is a major crop, fed to livestock. There are many crops and livestock grown to fill the many niche markets.

Name of sponsor of Barn Quilt : Nadine and John Pate