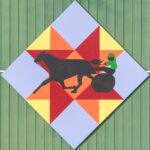 This traditional quilt pattern is the “Spinning Star”, harking back to a time when spinning one’s own yarn was common.  With only a little imagination this pattern becomes a playful nod to Ray Lowery’s passion for standard-bred horse racing, with the wheel being the oval of the racetrack. Look closely to see the green of the jockey’s outfit. This was the colour that Ray was pleased to wear when he jockeyed. The colours of the quilt pattern were chosen to compliment the green of the barn on which the block is mounted. But equally importantly the red, orange and yellow echo the plumage of the laying hens that Fran Lowery keeps. She proudly continues the long tradition of farmers’ wives keeping chickens for eggs.

Lowerys were early settlers in this Township; the first was Maria Lowery in 1824. The historic 1861 map of this Township (Tremaine) clearly shows this land being owned by Ray’s great-grandfather, William. The historic 1878 map (Belden) shows the same property as Lowerys’ but divided: Ray’s grandfather, Reid, having bought half. Because farming goes back a long way in the Lowery history, there have been a succession of barns on the property: the green one that displays the quilt was built in 1982.

Alongside farming, Ray was and is an enthusiastic horseman, raising and racing horses. And he comes by this passion honestly from his father and his uncles before him! The type of horse Ray is especially keen on is the standard-bred. This is the kind you race with sulkies; hence the silhouette on this barn quilt. In fact in 1986 Ray built a half-size racetrack on his property. Ray also has the distinction of being a founding member of the Kawartha Downs racetrack in nearby Fraserville. Kawartha Downs subsequently expanded to include Ontario Lottery and Gaming slot machines. This facility employed many people and attracted visitors from a wide area. The “Spinning Star” quilt pattern ultimately reminds us of not one but two racetracks: the one on the Lowerys’ land and the other at Kawartha Downs.