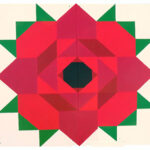 Mounted next to the entrance to the Royal Canadian Legion, Branch 402, in Millbrook, the “Remembrance Poppy” 8’x8’ barn quilt block represents the readily recognized symbol that honours veterans and commemorates those who have given their lives in the service of their country.  Red poppies have been associated with conflict since the Napoleonic Wars of the early 1800s, when a writer of that time first noted how poppies flourished over the graves of soldiers.  During World War I, Lieutenant-Colonel John McCrae, a Canadian Medical Officer, wrote “In Flanders Fields” which inspired the wearing of a poppy as a sign of remembrance.   Among the many services Branch 402 provides for the community throughout the year is the annual Remembrance Day Parade and Commemorative Service held close by at the Cenotaph.