The Irish Tree of Life 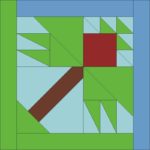 The tree of life is the Irish symbol of Family. George Ward and his wife left their ancestral family in Ireland to come to the New World. They were determined to build their own family and heritage in these lands. Many Irish people travelled to resettle in the Canadian wilderness in hopes of a better life. The English and Scots settled this part of Ontario as well. Many Europeans saw Canada as a land of opportunity and potential for prosperity. They left their native lands in order to have a chance at a better life.
Through these settlers the tree of life was established in Canada. Many couples came to the area with children and had many more children once settled. Many families were noted for their shear numbers. Often as many as ten children were born to a single family. A family of five or six offspring was considered small. Over the years, generations of people were established in the Longwood’s region stemming from a few settlers such as George and Margaret Ward.

Name of sponsor of Barn Quilt : Hosted by Frieda Timmers and sponsored by Town and Country Landscaping

The Irish Tree of Life