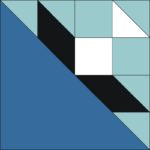 Ship at Sea –  was a significant part of George Ward’s life. Ward would have been very familiar with travelling by sea and operating sailing ships. He made many trips across the ocean when he was enlisted in the British Army.
The sailing ship was the only way in which the continents of the world were connected during the 19th century. The ship served many purposes for people of Europe and North America. Ships transported people who chose to leave willingly. Refugees who were forced out of their countries left by boat.  Many left their homes via ship out of necessity. It was a special breed of men and women who boarded ships headed for the wilds of North America.