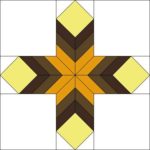 In an attempt to explain the history behind this block, we need to understand why this fertile and attractive land of the South Western Peninsula remained uninhabited for nearly 100 years prior to the 1750 time frame of our quilt. For summary purposes we will call this phenomena The Aboriginal Wars. When Champlain and later Cartier came to our area there were basically three Aboriginal Nations: to the north the Hurons, to the south the Iroquois and in between the powerful, talented and fierce Attawandarons. Both the Iroquois and Huron Nations traded furs for flints with the Attawandarons or Neutrals. But both these tribes were sworn enemies of each other. The Neutrals were not a civilized nation but possessed an unusual aptitude in warfare, hunting, fishing and the limited agriculture of their time which likely was responsible for their extraordinary size and strength. But their great skill with flint for arrows, tomahawks, knives and spear points was what made them important trading partners.
The Hurons established a lucrative fur trade with the French which they jealously guarded and steered the French explorers away from our area. However, Neutral territory was visited by Jesuits who described these first residents of Kent as “habits, food, clothing, ceremonies , government and language is clearly akin to both Huron and Iroquois but in physical strength and proportion they surpass the Iroquois.”
In 1648-49, the Iroquois attacked and eliminated the Huron some of whom sought refuge with the Neutrals. Then the Iroquois turned their arms (match-locks they had received from the Dutch at Fort Orange) against the Neutrals who fought desperately to save their territory but by 1651 they had been killed or driven from their rich lands; women carried off, men not killed escaped across Lake Huron and the children and elderly who escaped to the woods perished during the cold winter. Result: empty land occupied only by wandering tribes of Ojibway or Mississauga who didn’t really settle. By 1776 when the British authorities came on the scene, it was these tribes that they recognized and purchased land from.
When Loyalists, war weary soldiers and other settlers started to arrive,it was the Indians who helped them survive their first winter. If there had been a crop failure or a decrease in game the native tribes would have starved so they knew how to subsist off the land. The three sisters (corn, beans and pumpkins or squash) were the first crops planted. Then berries and nuts were gathered and stored; herbs were available in the forests along with roots and fruits. The rich land provided black walnuts, butternuts, hazelnuts, beachnuts and American chestnuts.
Berries included; gooseberries of several kinds, wild black currant, swamp red currant, wild strawberries, elderberries, mulberries, rose hips, custard apple (paw paw), may apple and American crab apple, wild plums, cherries (black, rum, choke, sand and pin); wild grapes, wintergreen berries and cranberries. In the swampy areas, rice grew. For greens the choice was huge: Ferns of several kinds; marsh marigold; bitter cress, milkweeds, dandelions. Edible roots included arrowheads; Jack-in-the-pulpit (roots boiled then dried and ground into meal for cakes or gruel); wild onions, leeks,garlic and ginger; Jerusalem artichokes, cat tails, wild arum and evening primrose (boiled like potatoes). Then there were the beverage plants: black birch for tea; sassafras bark (the oil was used for medicine and flavouring); spicebush (leaves, twigs and berries used to make tea; Kentucky coffee tree was used as a substitute for coffee; Staghorn sumac berries made what was called Indian lemonade.
Then there were the natural sweeteners: Sugar Maple; Black Maple, Red Maple and Silver Maple all produced a sweet sap and was the principle sugar of the day. Canada Balsam produced a gum that the natives used like chewing gum; Reed Grass produced a sweet gum when the stems were injured which the Indians used like candy. We must not forget the fungi that grew in the rich loam of the forest soils: puffballs, morels and coral fungi. A veritable feast supplied by Mother Nature IF you knew where and what to look for and how to use it. The new settlers were fortunate to have the Indians to teach them about all these things.

SOURCES: Romantic Kent by Victor Lauriston
Valley of the Lower Thames by Fred Coyne Hamil
Kent Historical Society Vol.#8 1986 (reprint): The Use of Native Plants for Food
by Indians and Early Settlers of Kent County by Charles Hand.