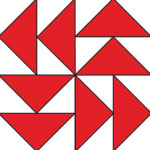 The ‘Dutchman’s Puzzle’ represents the integral role of Dutch immigration to Oxford County, which began as early as 1946. Henry Couwenberg emigrated to Canada from the Netherlands in 1956. In 1965 he and his wife Kay established Couwenholm Farms and apple orchard in Burgessville. Burgessville has long been known as centre for apple production and home to the first Fruit Growers Co-Operative in the county.