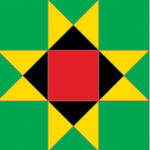 Peace Star – Thomas Ford, from Edinburgh, emigrated to the United States in 1808 and eventually established a brewery in Caledonia, New York. When war erupted in 1812, the U.S. government confiscated Thomas’ horses to draw munitions and compelled him to fight his countrymen. After the war he abandoned the U.S. and settled here. His sixth generation descendant now works the land. The colours represent the Ford tartan.