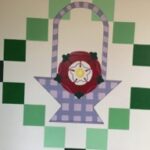 What would life be without flowers? So it’s no wonder we have another quilt featuring flowers. Front and centre is a stylized rose: a white and red rose in the traditional form known for centuries as the English or Tudor Rose. Freda Eagleson (née Stares) chose this flower in homage to her English heritage. But to be fair the Irish roots of Gordon Eagleson’s family need to be celebrated too! And therefore the rose is bordered by an Irish Chain. The inspiration for this block comes from a quilt that Gordon’s mother made for them in the ‘80s. In it she had worked a basket holding not a rose but three stylized white and yellow daisies. The colours for the quilt are basically self-evident. The rose had to be white and red (remember your English History with the Wars of the Roses–the red rose party won out over the white rose party, and Henry Tudor adopted both colours in his emblematic rose); and everyone knows the colour for Ireland and the Irish is green! The gingham of the basket recalls that as a farming woman and quilter, Marion Eagleson, would have used whatever fabric was attractive and at hand.

This 4’x4’ block is mounted on posts near the road in order for it to be viewed with ease by passersby. But mounting it in this way also allows the Eaglesons to display two plaques they are very proud of: in 1967 plaques were distributed to farmers to celebrate Canada’s 100th birthday, and in 2017 the same was done for our 150th birthday.

The Eaglesons have lived on this property and worked this land since they took it over from Gordon’s father in 1966. They raised their children here and love having their grandchildren come to visit. But the Eagleson name and this property go much further back! One of Freda and Gordon’s proud possessions is the original deed granted to William Monk Eagleson in 1849. William Monk is Gordon’s great-great-grandfather: that’s five generations of Eaglesons on this land. William Monk emigrated from Ireland with his family in 1842. For further information on the Eaglesons of this area see the Millbrook and Cavan Historical Society’s book, “This Green and Pleasant Land”.

The Stares, Freda’s forbears, in comparison are relative newcomers: she came as a child with her family from England in 1957. Freda’s immediate family came from London.

Farming and gardening are in both Gordon and Freda’s blood. The basket in the quilt is a heart-felt tribute to the land, from which we harvest both food and flowers. As for the farm, Gordon and Freda now raise beef cattle and grow cash crops of hay and grain.

Gordon and his family treasure many quilts his mother made them. Marion spent many a winter’s day quilting. And Gordon remembers the quilt frame set up in the dining-room, resting on the backs of chairs. One other prized possession of the Eaglesons is a silver serving spoon passed down through five generations. On the back of it, one of the hallmarks is a crown and harp. Like the rose and the Irish Chain, this hallmark celebrates the dual heritage of the English and the Irish.

Name of sponsor of Barn Quilt : Freda and Gordon Eagleson