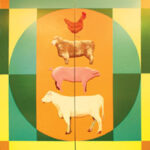 The Oslands are the direct descendants of Robert Beggs, the first owner from England. Built in the 1870s and restored with a new stone foundation in 1902, the original barn was torn down and a new barn constructed from barn boards offered by their parents. Two additions were added in the 20s and 60s to house pigs. Now the family farms sheep, chickens and cattle. The large “O” represents the pride of ownership over four generations of Oslands and four animals that have and still reside here.