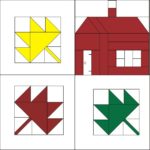 It was on this lot in 1850 that the first School house was started but not completed. In 1855 a school was built just west of here on the brow of the hill, It was a very crude structure of hewn logs, plastered on the outside, and rough planks for seats. hen in 1892 a school S S No 9 was built at 31754 Duff Line, further west again. It was surrounded by Maple trees. It was used until 1966 when it was torn down and the present home was built. IN 1832 the Campbell’s bought the land and have farmed it ever since. In 1964 it was incorporated with three brothers, Angus, Clifford and Don Philip and their parents John Philip and Agnes Jean. ( Belldoon Farms Ltd.) In 1973 they started to breed Limousin cattle which Tony Gosnell and family continue to do.