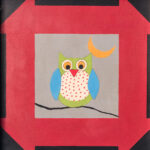 Millbrook resident and quilter, Jeanne Moran, has been part of the Cavan Monaghan Quilt Trail initiative from the first meeting. She was also the first to paint and install a barn quilt panel here at her home.

The quilt pattern is the very traditional Hole in the Barn Door. The Owl is an appliqué pattern; a pattern is stitched onto a quilt using a different stitch from the usual quilt stitch. Jeanne chose this classic design to adorn the barn on her property where she does all her quilting. She created the image of the owl on a branch using the visual perspective of looking outside through the “hole in the barn door” and seeing the trees with an owl sitting there. The colours were chosen to match the grey of the barn and the red of the door; while the quilter in Jeanne conjured up the imaginative colours of the owl.

This block also celebrates the Barn Owls, a quilting group that has been meeting regularly in Jeanne’s barn since 1996.  Each of the members has been touched in some way by cancer and they are part of the Quilts for Cancer in Peterborough and Ida, donating all their quilts to cancer patients. Jeanne says, “some days we do a lot of hooting.”

Jeanne and her husband are privileged to live in what is believed to be the oldest house in Millbrook, built around 1835. The original barn was erected around 1837, although the current structure is a replica. There is a historical mystery with this house as curiously no map or plan of the village ever showed a building in existence at this location. This house is a lovely example of an Ontario Regency cottage. The exterior walls are wood covered with embossed panels of tin. The porch is decorated with intricate gingerbread, posts and railings. The original front door was actually on the Baxter Creek side as people came and went using the creek before roads were built. You can glimpse the “front” of the house from County Road #10 just down the hill from Bank Street North.

The house was purchased a couple of years after its construction by a member of the influential Sowden family, John V. Sowden. On the southeast corner of Bank Street North and County Road #10 a flax mill and a distillery were situated, owned by two of the Sowden brothers.

John V. Sowden was the first born of 16 children. But it was his 8th sibling, William Henry, who was to become especially famous; known locally as “Squire”. He served in many public offices such as Reeve and Justice of the Peace, and became very prosperous by his many land transactions, including a large property where he created the long-gone “mansion grounds.” The late 1870s saw a period of depression for farming in Ontario. Always the savvy business man, Squire Sowden moved his family and a sizeable portion of the population of Millbrook west to Manitoba, where they settled in Souris.